The Mount Edgcumbe Camellia collection was started in 1976 by the International Camellia Society who wanted to establish a reference collection of Camellias and identified Mt Edgcumbe as a suitable venue not long after its purchase by Plymouth City Council and Cornwall County Council in 1971.

It was added to the list of National Collections by the NCCPG, now Plant Heritage, in 1981. In 2003 it was awarded the status of Camellia Garden of Excellence by the ICS.

The collection contains around 900 varieties, mostly arranged into sections by their geographical origin. Since most are hybrids, that is the country where they were raised. A trail, with direction signs and interpretation boards, takes in most of the collection on reasonably accessible paths. 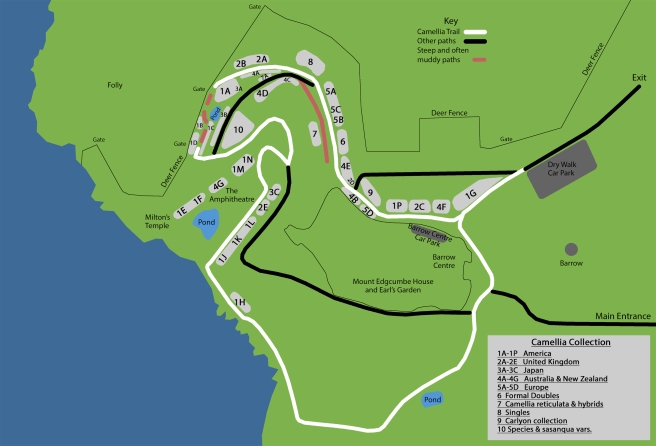 This part of the park is mostly rather steep and the trail is a mix of concrete roadway, hard but somewhat rough tracks, grass paths and muddy paths. The two sections highlighted on the map would not be accessible to wheelchairs. The rest would be with care but some sections are steep and some rough and/or potholed.

The best time to visit is between February and April, when the vast majority flower. However, there are autumn flowering varieties to be seen from early October into the new year; the earliest japonicas are out before Christmas and the latest may still have flowers in May or even June.