It was late in the day before I finished my planned jobs and set off to see what I could find in flower. C. sasanqua ‘Hugh Evans’ is flowering in areas 1G and 10. ‘Tanya’ is out in 1G but the flowers are small and few in number. It’s a variety with small leaves and a bushy habit that would make a great hedge but when it comes to flowering is a disappointment. 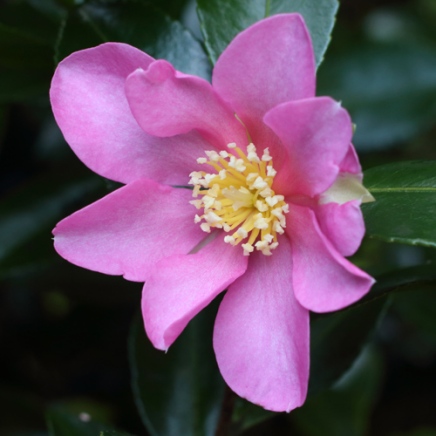 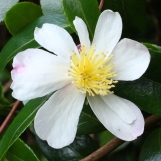 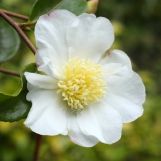 Also in 10 were two ‘Plantation Pink’s just getting started and what purport to be ‘Rainbow’ and ‘Narumigata’. The ‘Narumigata’ is almost certainly something else but I don’t know what. Down in the amphitheatre ‘Setsugekka’ had opened three blooms in Japanese section 3C and ‘Snow Flurry’, in 1L, was covered in white flowers.

In this picture of the left hand half of 1L, ‘Snow Flurry’ is to the right of and behind the hornbeam towards the right side of shot. Just to the left of the Hornbeam is the broken trunk of a massive beech that came down on the camellias a couple of months ago. The tree has been removed and what was left of the camellias tidied up as best it could be. Most are already shooting but how the new growth will fare in winter remains to be seen. A couple of plants have nothing left above ground and a dozen or more suffered serious damage.

Some weeks after the beech came down, another tree further up the bank fell down, presumably because it was no longer sheltered by the beech. Fortunately it did no further damage. A stream runs across the picture and is buried in Persicaria campanulatus which is becoming a very serious weed in this area. On the positive side, it is providing quite a lot of flower for 10th October. I don’t know whether it is a good source of nectar and pollen for bees.

My three main tasks for the day were to clear away piles of fallen branches in area 4A, collect seeds and do some labelling.

Area 4A has suffered badly from trees falling or shedding branches onto it. Quite a lot had not been cleared away so I went in with a bow saw, cut it up and moved it out of the way of the camellias. 4A is very steep and I would like to open up an access path along the bottom in addition to the main ride along the top. It’s a work in progress.

Collecting seed was a task I started on a fortnight ago with one early variety. Last week I added another seven and today a further eight. Usually the pods begin to split, indicating their readiness; in one case the pods were dropping, though not splitting. My intention is to clean them up and put them into the RHS Rhododendron, Camellia and Magnolia Group seed exchange. Camellia seed must not dry out, as soon as I have extracted them from their pods I will put them into plastic bags and send them away.

The seeds from the fruits above.

A large fruit, beginning to split open and looking like it will yield several seeds.

The contents of the fruit above, just two seeds.

One of the first things I did last year when I started working on the collection was to assign each individual plant a number. I am now putting those numbers onto the back of the plant’s labels, using a Brother label printer. Thus, for example, where before the two plants of ‘Nuccio’s Gem’ could only be narrowed down to area 1G, it is now easy to see which one we are referring to. Necessary, in this instance, because while one is correctly named, the other is not and remains unidentified.

With something like 1600 plants in the collection it is going to take some time but my hope is to complete the task by autumn of next year.