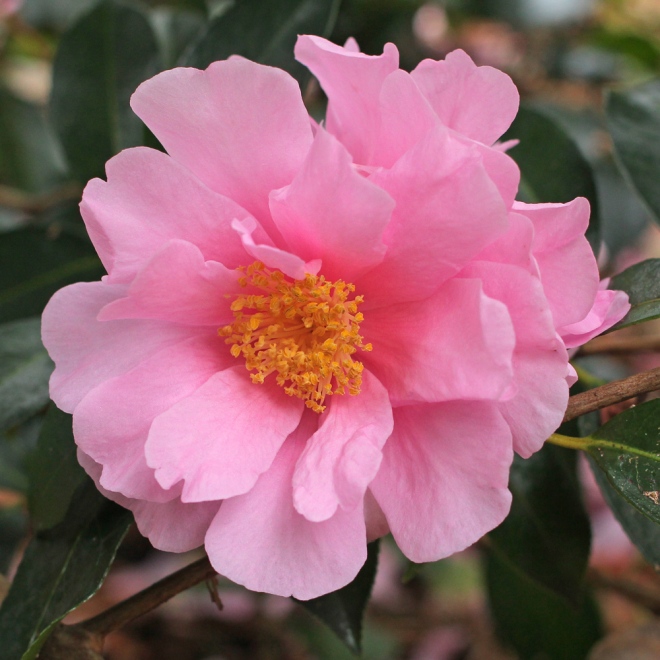 This is without doubt the stand out plant in the collection at Mount Edgcumbe in December and January. After that the spring flowering varieties start to challenge it, but none of the winter flowerers can rival it for flower size or length and impressiveness of flower display.

‘Show Girl’ appears to be the best performer in cooler climates such as the UK but is not as successful in hot climates where its blooms wilt. ‘Dream Girl’ is the opposite, performing very well in hot climates but slow to start flowering in a cooler one. Nevertheless, when it does start flowering, ‘Dream Girl’ is on a par with ‘Show Girl’. Sir Peter Smithers wrote in the ICS journal in 1984 that his ‘Dream Girl’ didn’t flower in its first ten years, then subsequently was smothered, and 13 years after planting was 26 feet tall.

In America their characteristic of shattering, making them unsuitable for showing, has been deemed an almost fatal flaw but they have been extensively used in breeding programs. I’m not aware of any of this new generation becoming established in the UK.

There are three plants of ‘Show Girl’ at Mount Edgcumbe, at 1J-036, 1L-038 and 10-056. The best of these is 10-056, now around 12 feet tall, upright and shapely. 1L-038 is at the front of an area which had been heavily shaded by a beech tree which has now fallen. It hadn’t flowered as freely in the past but this year seems to have benefitted from the improved light levels. The 1J-036 plant is smaller and in a more exposed place.

The blooms on 10-056 start to open in December and carry on until March. It is never smothered but it does make an impressive sight for much of that time, resisting wind and slight frosts pretty well. The flowers are semi-double and open out flat, getting a little larger as they mature. They are often 6 inches across.

Flowering in mid winter means that light levels when photographing it are usually low and the sky usually overcast, altering the colour picked up by the camera. Some of these pictures will have been more successfully corrected than others. 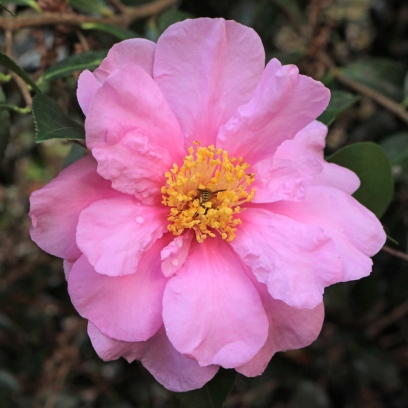 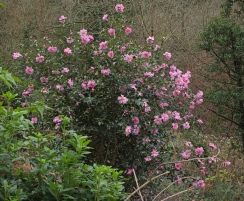 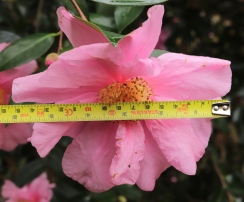