It being Tuesday, my day was spent at Mount Edgcumbe. There are still a few sections of Camellia plantings that I have not properly documented. One such is the first group of Camellias that was planted to get the collection off the ground. This was back in 1976, when 50 plants, donated by the International Camellia Society, were planted in the Formal Garden.

Well away from the rest of the collection as they are, it is an area I haven’t looked at in a while. Four were flowering.

I moved on to an area nearby called Gordon’s Glen. This is a steeply sloping and rocky area which was planted with camellias two years ago. Anticipating that there might be casualties and not expecting much blooming for a while, I have put off setting up a page for them on here. Almost all are duplicates of plants elsewhere in the collection. Most have buds; watch this space.

My next task was to put permanent labels onto the twenty three plants I had donated to the collection a month ago. Satisfyingly, eleven are new varieties and ten are duplicates of varieties represented by a single plant.

They will get added to their respective sections in due course.

On my way around I snapped away at anything I hadn’t done too many times before and came up with these. Click the images to see larger size with names. 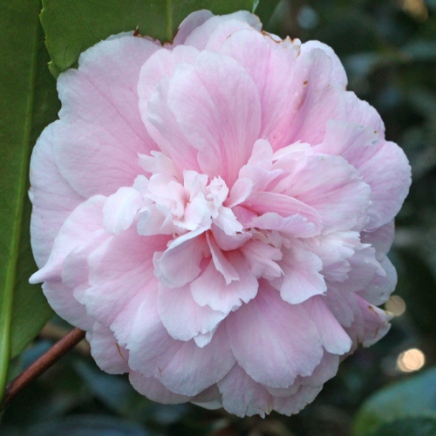 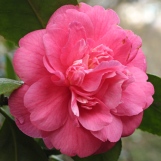 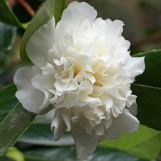 Finally, to revisit a variety I have mentioned before. 1P-039 and 1P-040 are both labelled ‘Peter Betteley’ but it is clear that though similar, they are sister seedlings. 1P-040 has just opened its first bloom; two weeks ago 1P-039 already had several open, adding another small difference to a growing list. The plants are side by side in identical conditions. These are all of 1P-039, this week and last. 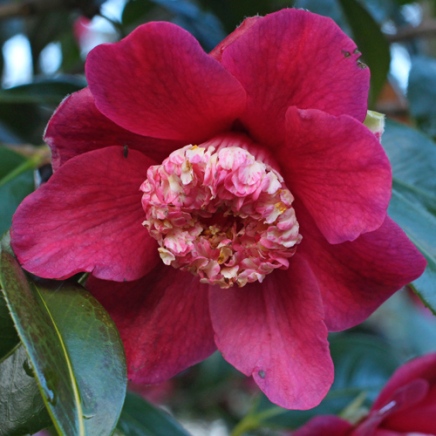 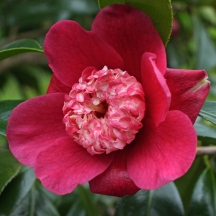 Or to put it another way, notes from my day at Mount Edgcumbe yesterday.

There were a lot of things blooming in the park yesterday. The sasanquas are in some cases going over, for example ‘Hugh Evans’, ‘Tanya’ and ‘Plantation Pink’. Some, for example ‘Narumigata’, ‘Bonanza’ and ‘Gay Sue’ are still in full flow, a few are just beginning, like ‘Kanjiro’. The sasanqua x reticulata hybrids ‘Flower Girl’ and ‘Show Girl’ are only just starting. 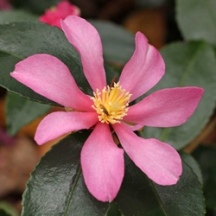 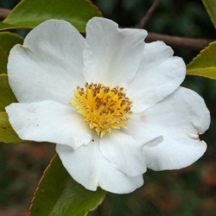 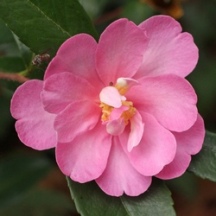 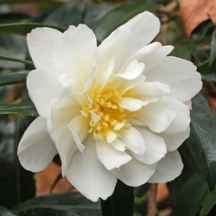 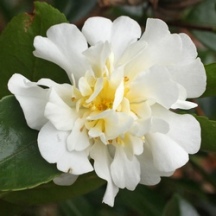 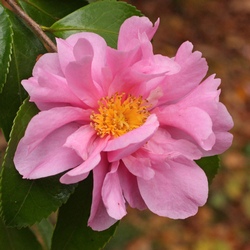 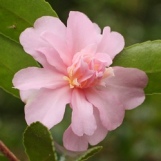 Of the rest, there are some that usually flower early, ‘Nobilissima’, ‘November Pink’, ‘Daikagura’ and ‘Gloire de Nantes’, and these are well into their stride. One of the ‘Peter Betteley’ seedlings and ‘Elizabeth Rose Open’ belong in this group. Then there are odd blooms dotted around pretty much at random, one on ‘Inspiration’, one on ‘Cheryll Lynn’, a few on ‘Alexander Black’. 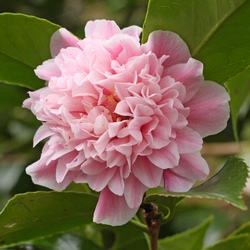 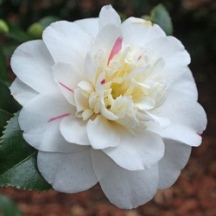 ‘Show Girl’ never fails to astonish me. The flowers are huge, that’s it at the top of the page, and produced in the depths of winter. They nevertheless show some measure of resistance to damage and are produced over a very long season. Their pale clear pink is not in the least strident and for all their size the overall effect, to my eye at least, is of refined showiness. 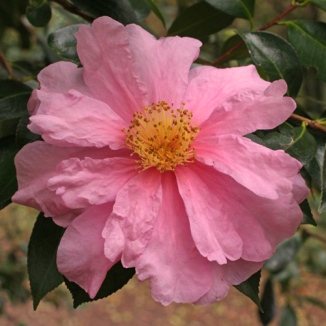 I think I may have solved the problem of the plant at 1G-014, which is labelled ‘Chansonette’ but produces large white single blooms. As noted in an earlier blog, I suspected it might be ‘Kenkyo’, based on some pictures I have of that variety from several years ago and supported by it being a variety that the nursery that supplied it listed. What I needed though was a growing and flowering plant of ‘Kenkyo’. To my very great satisfaction I found one at Trewithen on Monday. On flower form the only other variety it seemed likely to be was ‘Setsugekka’. Comparing all the photographs I have now amassed, it seemed to me that the stamen filaments of ‘Setsugekka’ are slender and cylindrical, compared to 1G-014 and ‘Kenkyo’ (Trewithen), where the filaments are stouter and thickest in the middle, tapering to both ends.
The difference in flower colour in the pictures is not significant as it is due to lighting conditions.
Comparing foliage, the leaves are all quite similar but those of ‘Setsugekka’ are held at roughly 90 degrees to the shoot, whereas on the other two, the leaves are angled well forward on the shoot. The petioles of ‘Setsugekka’ are also stouter and paler in colour. The difference in leaf angle is consistent across the bush, making it a more convincing diagnostic feature than the pictures might imply.

I am satisfied that 1G-014 is in fact ‘Kenkyo’, though I shall never be 100% confident. I shall recommend relabeling it as such. 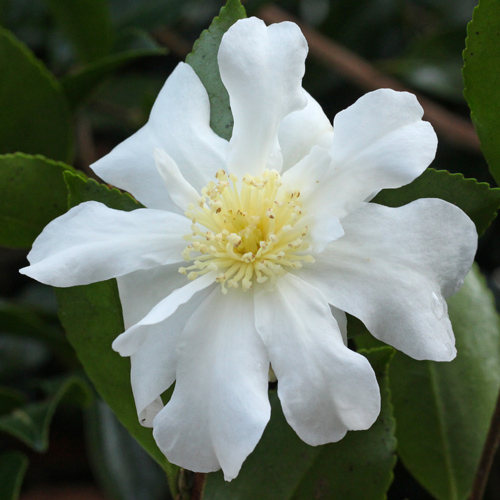 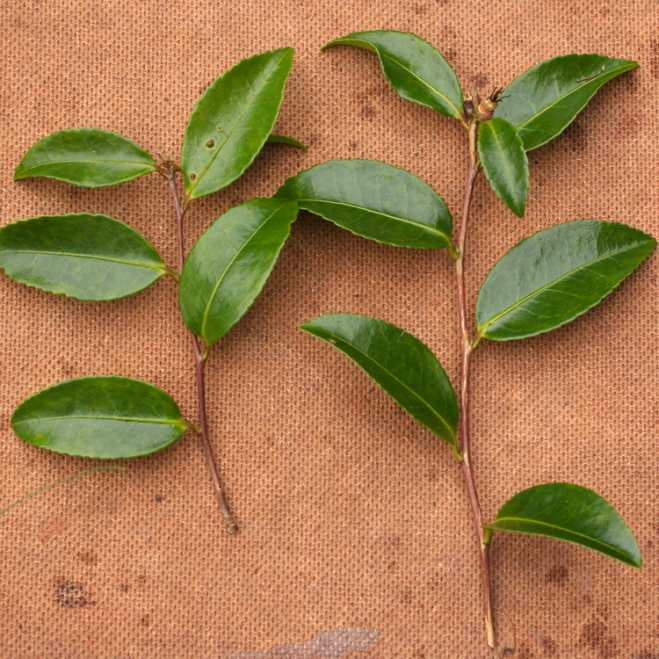 Yesterday, wanting a change from Mt Edgcumbe, I paid a visit to Trewithen. The garden is closed now for the season, reopening March 1st 2018, but head gardener Gary kindly let me loose with my camera. Part of the reason that the winter flowering camellias are not so well known is that many of the gardens where they are grown are shut during their flowering season, which kicks off in October and goes on until February, when the spring varieties take over.

I have never been to Trewithen at this time of year so I didn’t know what to expect, though I had a hunch it would be good and I wasn’t disappointed. I found a good range of varieties flowering freely. ‘Paradise Helen’ is a variety I haven’t seen in ten years or more; ‘Kenkyo’ I was very pleased to see as it may well enable me to resolve one of Mt Edgcumbe’s mystery plants and taliensis, well what can I possibly say about a fifteen foot plant covered in scented blooms on a dull day in the middle of November. 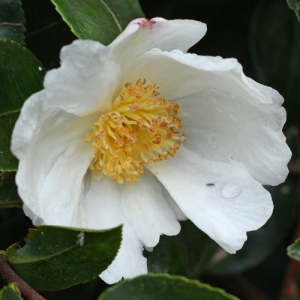 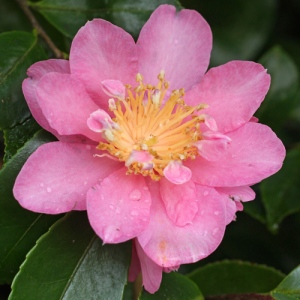 There were a few plants that I was unable to find a label for, I will check with Gary and label them in due course.

Trewithen is set fair to be a garden to watch. While I was there I was shown around the hugely ambitious and exciting new area they are developing. Even at this early stage the framework of ponds and wooded areas is looking like a fantastic canvas on which to create a new garden area. 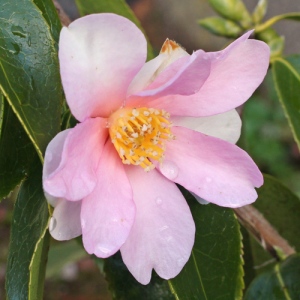 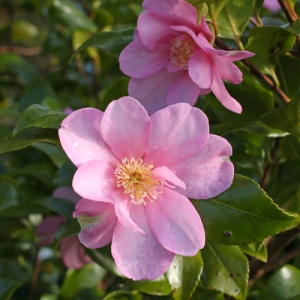 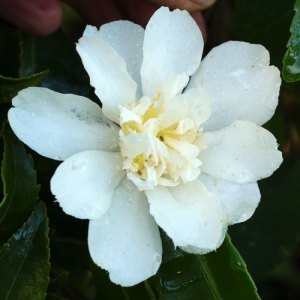 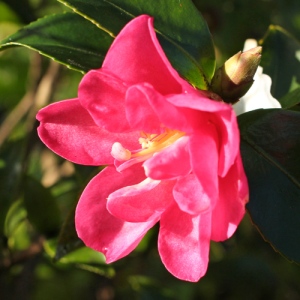 Sunday took me to the other side of Devon, to the garden of a camellia enthusiast with a particular liking for scented blooms. Outside of the National Collection it was certainly the biggest range of autumn/winter flowering camellias I have seen in one place.

Some were varieties I was familiar with, some varieties I knew of but hadn’t seen and some completely new to me. The “sasanquas”, as they are often collectively known, get overlooked by gardeners because they flower in winter and people don’t go garden visiting much in winter. Often the gardens where they are growing are closed. People don’t go to garden centres so much in the run-up to Christmas either.

This is unfortunate because they start to flower just as the very latest herbaceous perennials, asters, nerines and the like, finish. They typically produce a few flowers at a time over six to eight weeks though some will put on a more ostentatious but shorter lived display.

Let me add a little more about a few of the varieties I thought stood out.

‘Christmas Rose’ was the first variety I saw and was remarkable for the size and number of blooms on a still small plant as well as for the vivid pink colouring. The register has it as (C. x williamsii x c. hiemalis) and says it was raised in America.

‘Yume’ originated in Japan from the cross C. yuhsienensis x C. hiemalis ‘Shishigashira’. The petals are a mix of pink and white with very gradual shading between the two colours. The inner petals are generally closer to solid pink. It has a pleasant fragrance.

‘Souvenir de Claude Brivet’ was raised by Pépinières Thoby in France as a seedling of C. oleifera ‘Jaune’ x C. sasanqua ‘Crimson King’. The flowers are medium sized and may be solid pink or pink and white striped, with varying amounts of pink. I have not seen a totally white flower.

‘Narcissiflora’ is not a variety listed in the Camellia Register. The plant is being sold in garden centres, the stock originating from Holland. There are several varieties in cultivation with large single white blooms and it remains to be seen whether this new addition distinguishes itself in some way.

I should perhaps mention C. sasanqua ‘Hugh Evans’ and C. sasanqua ‘Gay Sue’. They were there too and I didn’t photograph them because I already have numerous pictures of both. Both are excellent varieties.

It seemed to be the large single white flowers that were causing me grief today. At 1G-014 is a spreading bush which is labelled ‘Chansonette’. It should therefore have small, bright pink double flowers. This is what it looks like.

Flower wise, it looks very like the two plants of ‘Setsugekka’ in 3C. This is what they look like.

Both ‘Setsugekka’ are upright, fairly open plants. 1G-014 is low and wide spreading. My inclination is to regard that as unimportant. 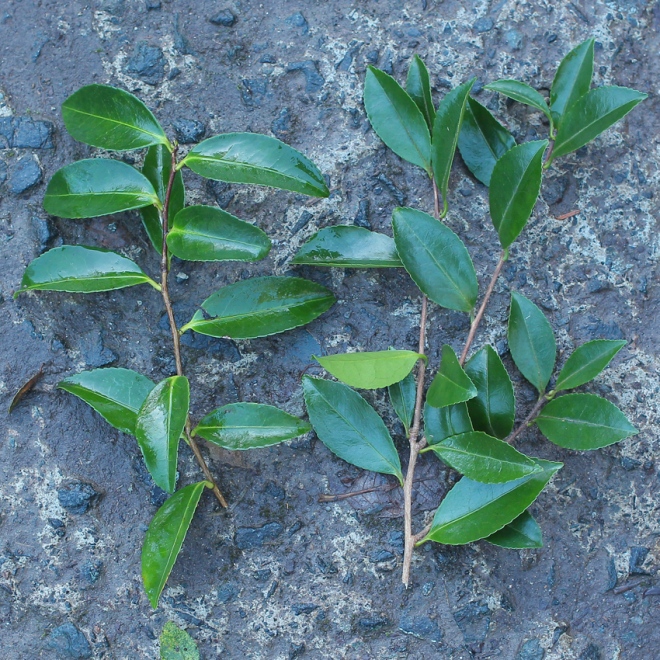 are stouter and lighter coloured and the leaves are mostly at right angles to the shoot, compared to the more forward pointing leaves of 1G-014. These are small differences only discernible in a side by side comparison, but are enough to convince me that the two plants are different. I need to repeat the shot to show the undersides of the leaves and with a measure for size.

Back in 2016 I wrote another blog about this plant. Then I thought it might have been ‘Kenkyo’, a variety not in the collection. That was partly based on it being very similar in flower to the few pictures of Kenkyo that I have, partly on the fact that ‘Kenkyo’ was listed by the nursery who supplied it. If anyone with Kenkyo could provide me with a picture of the shoot to compare with the one above, I would be very grateful.

The next problem relates to 10-034 which is labelled ‘Narumigata’. There are in fact two different varieties planted together. One may be ‘Narumigata’, the other has a flower very like ‘Rainbow’ but a quite different leaf from the four plants of ‘Rainbow’ in this same section. The first picture is the flower on the plant that probably is ‘Narumigata’.

On the right are shoots from the plant that is clearly not ‘Narumigata’ and from the adjacent plant of ‘Rainbow’ 10-047. The unidentified plant has longer, narrower leaves with twisted acuminate tips. Here are two of its flowers.

As far as I am aware, this doesn’t match any other plant in the collection. Any thoughts on its identity would be welcome.