It’s a few weeks since I was last up at Mt Edgcumbe. Camellia season is over, but there are always a few stragglers, some that always manage a few late blooms and a few random things. I set about putting numbers onto the plants in section 5D, European varieties that are part of the Betteley collection. C. japonica ‘Maculata Superba’ had a single almost perfect bloom, that would fall under the random late flowerer category. 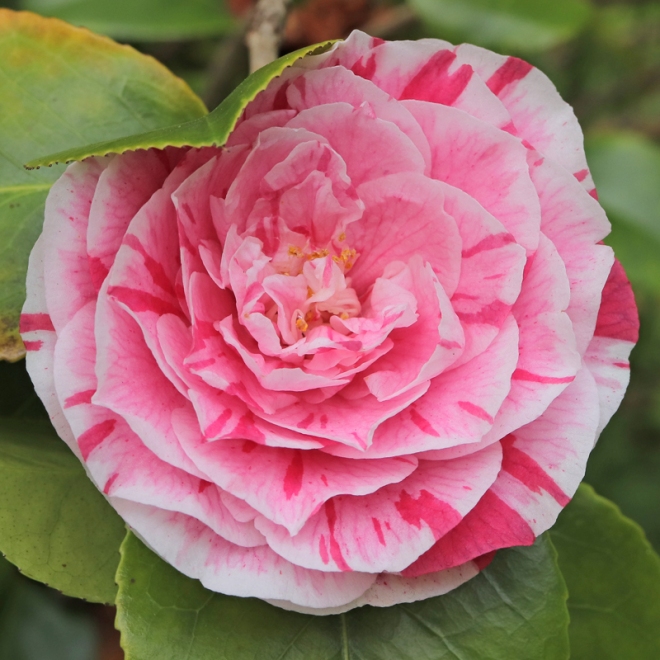 When I came to re-attach the label on another plant in the section I spotted a birds nest right in front of me at eye level. It looked like an old one so I felt into it and pulled my hand out pretty quickly as there was something wriggling. I used the camera as a periscope and took this picture of three very young chicks before moving away to allow the parents back. It wasn’t long before a blackbird hen was back on the nest. They wouldn’t have stood a chance in most gardens as it was easily accessible for cats, but I’ve not seen a cat in the park and presumably other predators are relatively few in number. 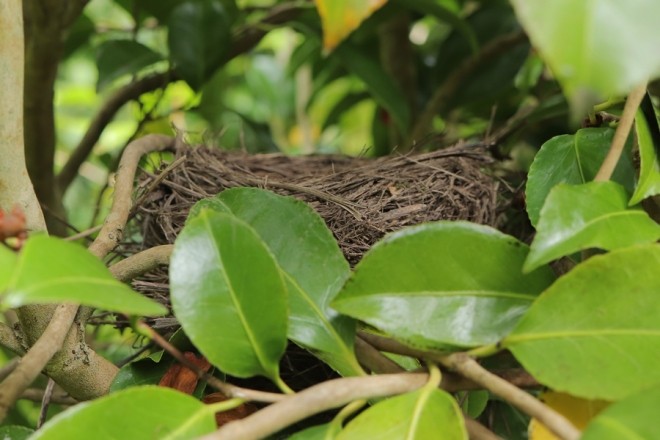 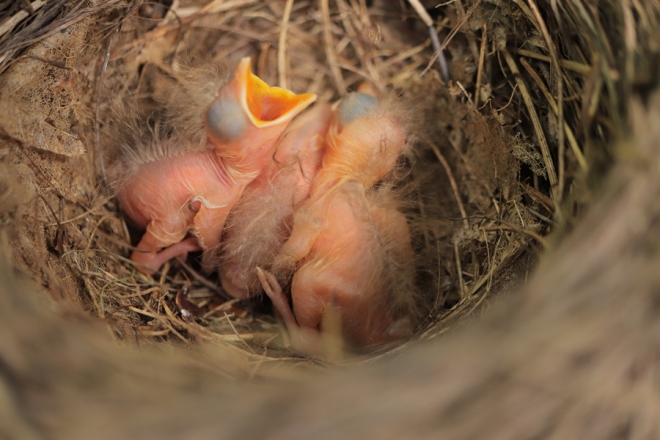 There are a great many nests in the camellia bushes, especially where they’ve been pruned and clusters of branches have grown back from the same point.

C. japonica ‘Forest Green’ is a regular late flowerer; so much so that in some years a lot of its buds never open at all. This year it seems to have behaved fairly normally but still has a few late blooms dotted about it. Formal double reds account for most of the regular late flowerers in the collection, I have a hunch that in sunnier locations they might behave a bit more normally. I had a plant of ‘Forest Green’ in full sun on my allotment and it flowered profusely in normal camellia season and I have a plant of ‘Eximea’ in my garden which gets much more sun than its parent in the collection, it also blooms normal season. ‘Forest Green’ is noteworthy for its glossy foliage; it is as good as any plant in the collection in this regard. 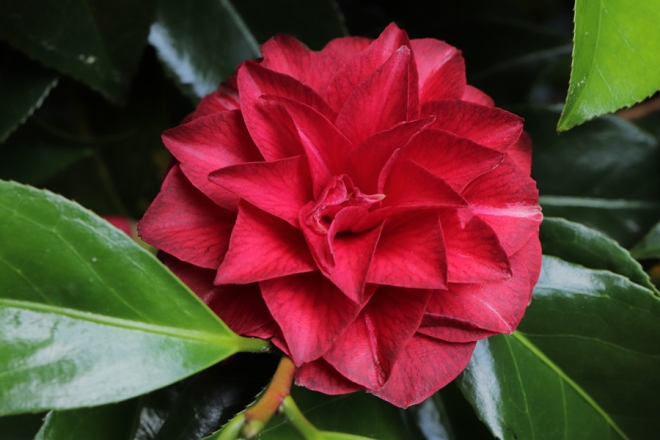 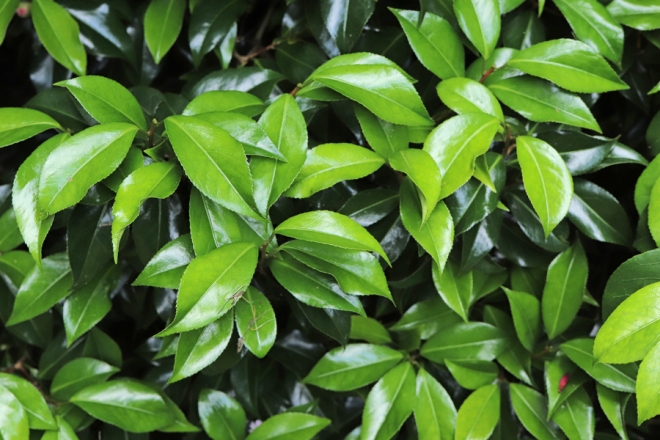 A short way down from ‘Forest Green’ is a group of large bushes that have been pruned back this year. They have been done before and in most cases the pruning cuts this year were made 6 inches to a foot above where they were made on the last occasion, which I would estimate to have been 8-10 years ago. As you can see in theses pictures, the regrowth last time was not thinned, so many shoots grew back from each cut stem. The crowded growth quickly put on height and the bushes were soon back to the size they had been before pruning, only much denser. 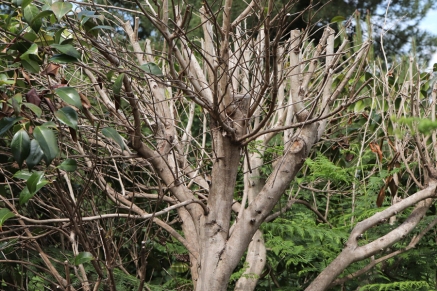 Already new shoots are pushing out from the cut stems and it is my intention to only allow a proportion of them to grow. My preference would have been to cut below where they were cut last time, removing the whole cluster of shoots to leave a single big branch, then to thin the shoots that arose from that. Cutting lower constitutes more severe pruning, with attendant risks, and anything below 4-5 feet is liable to be browsed by deer.

In July 2017 a tree came down onto section 1L, completely destroying a couple of the plants there. In Setember 2018, 14 months later, I spotted shoots just starting to grow on a bush of ‘Little Man’. Those shoots, tiny as they were, survived the winter and are now a few inches tall. 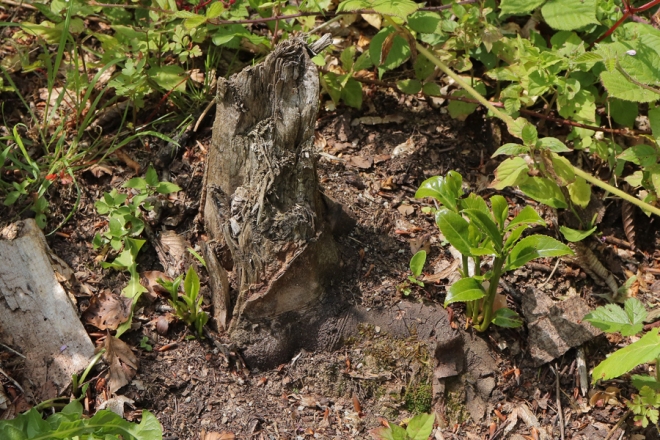 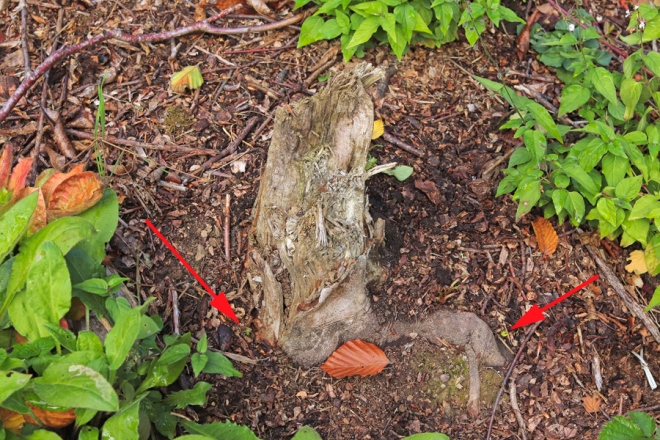 Sept 2018. Look closely and you will see green shoots.

The greatest threat now is someone with a strimmer who doesn’t know the plants are there. I don’t want to flag them conspicuously for fear of someone stepping on the shoots while trying to work out what the marker is for. With no marker there is no reason for anyone to go near them. So far the deer have left them alone.

2 thoughts on “Notes from the park”