‘Jean Lyne’ is an Australian variety raised in the 1940’s. Its register description is semi-double white with pink stripes and flecks. Two sports are listed, ‘Edith Linton’ and ‘Nancy Bird’. There is a plant labelled ‘Jean Lyne’ in Area 4D. I took these pictures of it yesterday. 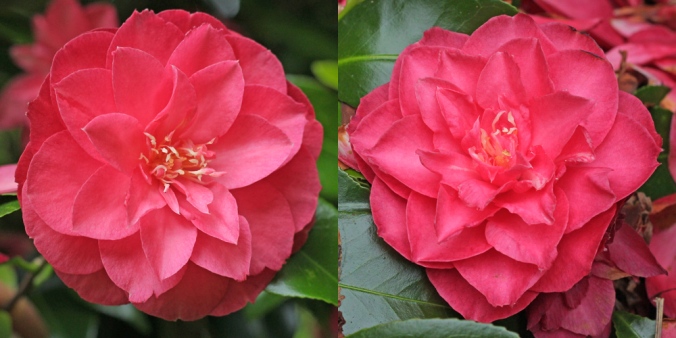 ‘Edith Linton’ seems to have been released as a sport quite early. It is described as semi double silvery pink and there are pictures in Macaboy and on CamelliasAustralia.com. They show a bloom very like the pictures of ‘Jean Lyne’ above, though with fully developed stamens in a central cluster. ‘Edith Linton’ has given rise to the sport ‘Edith Linton Deep Pink’.

There are three mature bushes labelled ‘Edith Linton’ in the Mount Edgcumbe collection, at 4A-018, 4E-025 and 4F-012. Two young plants were added to Area 4D in 2016 but have not flowered yet.
The 4A-018 plant appears identical to ‘Jean Lyne’ 4D-016. The difference in colour in the photographs is mostly due to different lighting conditions.

Both of the other two large bushes produce primarily white blooms with pink markings, plus occasional pink blooms in a variety of colours and patterns. Here are pictures of both taken yesterday. 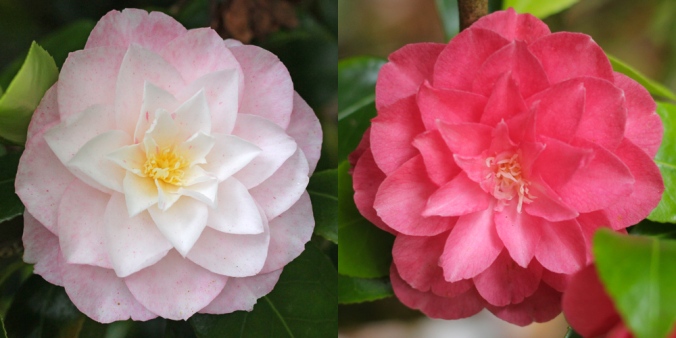 ‘Nancy Bird’ is represented by one old bush that is in rather poor health. It is described in the register as a light pink sport of ‘Jean Lyne’, identical in every respect except colour. There are pictures in Macaboy and on CamelliasAustralia.com. In both cases they show a pale pink bloom with deeper pink stripes; in the CamelliasAustralia case it has a white edge to the petals. In other words, both pictures are at odds with the “official” description.
The poor condition of ‘Nancy Bird’ doesn’t stop it flowering profusely and again, I photographed it yesterday. I fancy it could have been a slightly deeper shade of pink than ‘Jean Lyne’ 4D-016, but it was marginal at best.

The foliage is pretty much identical on all four bushes, the new growth is emerging at exactly the same time and is the same colour. The flowering of all four is at the same stage, all over but for a few odd blooms. The shape of all the flowers is very similar. I am left in no doubt that they represent ‘Jean Lyne’ and one or more of its sports.

It is curious that the white ‘Edith Linton’s throw up a variety of blooms but the self pinks bear only pink blooms. The white seems to be a chimaera containing two genotypes, the pink seemingly only has one.

It would appear that ‘Jean Lyne’ 4D-016, ‘Edith Linton’ 4A-018 and ‘Nancy Bird’ 4A-032 are in fact all ‘Edith Linton’. They may be ‘Edith Linton Deep Pink’ but that will be impossible to resolve without accurate colour pictures from a reliable source.

The two bicolored ‘Edith Linton’s are probably best regarded as ‘Jean Lyne’. All the evidence points to ‘Nancy Bird’ being an unreliably unstable entity the exact appearance of which is lost in the mists of time.

I shall recommend that they are relabelled accordingly. Ironically the only one that seems to be correctly identified doesn’t have a label on it, so five new labels are needed.

2 thoughts on “A Trio of Awkward Aussies.”