Seriously though, I just moved a sizeable camellia sasanqua ‘Tanya’ from my allotment to my garden. Here’s how it went.

We had a good drop of rain a few days ago. I gave it a couple of days to drain away, but a reasonable amount of water in the soil is essential and it is rarely safe to lift plants this size until well into the autumn. There needs to have been a good deal of rain to get the soil below a large evergreen shrub really moist.

I reduced the size of the bush by about a third. This will help reduce stress on the plant while it grows a new root system and made lifting it a bit easier. 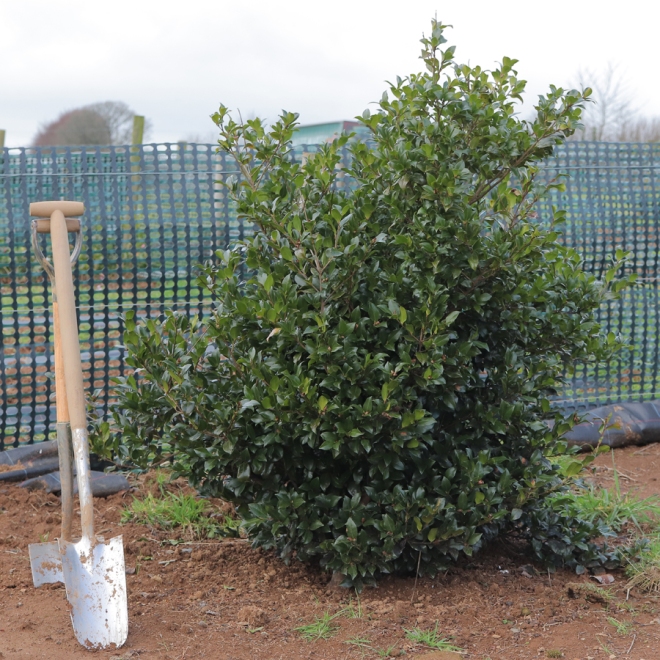 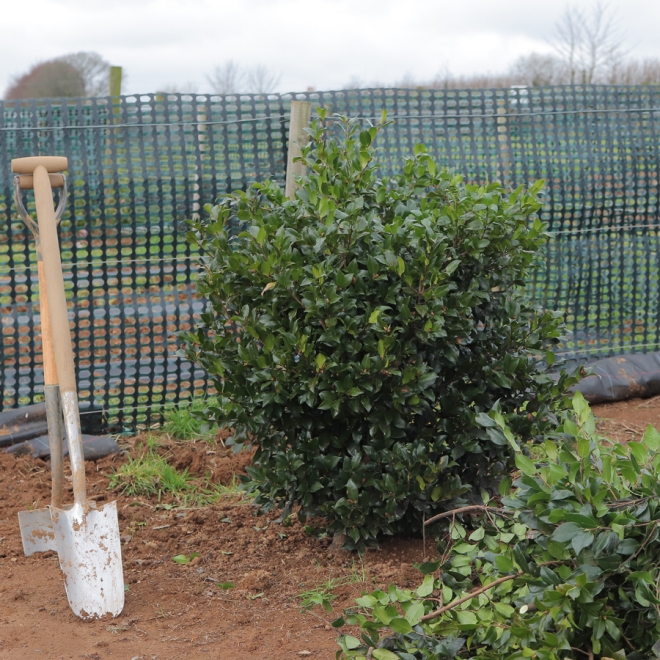 Bush reduced in height and cleared around the bottom.


I have a narrow bladed, stainless steel spade that I like to use for the next stage, which is to cut round the rootball. I dig straight down all around the plant, just cutting through the soil and roots, without levering on the spade at all. Next I use my old rather worn down spade with a fibreglass handle to take out a wedge of soil outside the vertical cut. I then cut in under the root system at around 45 degrees and start to lever the plant up to break any roots that go straight down below the root ball. I might have had to chop through roots going straight down below the rootball but in this instance didn’t need to.

Vertical cut ‘A’ made all round plant.

Soil ‘B’ removed either side of plant, then rootball undercut ‘C’

Soil pared away to reduce rootball to suitable size ‘D’


Once the plant is free, but while it is still in the hole, I chopped some of the soil away to reduce the size and weight of the root ball. My aim was to remove soil where there were insufficient roots to hold the soil in place. Since the root system was not evenly dense all around the plant, I cut more soil away on one side than the other.

I then pulled the plant out of its hole, remove a little more soil from the top and bottome of the rootball, taking care not to damage the base of the stem, before trimming the bits of root sticking out of the rootball flush. It’s hard to say how big a rootball a plant should have. Too small will leave the plant struggling to stay upright and get enough water; too big and moving the plant without the whole lot breaking away becomes very difficult.

Next I lifted the plant onto a sheet of polythene which I drew tightly up around the stem base and tied with polypropylene string. This wrapping needs to be tight as possible to help keep the rootball intact while it is moved. 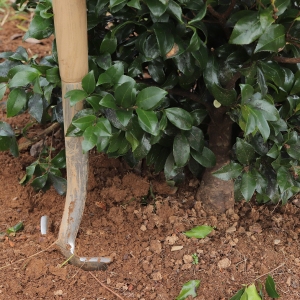 Remove some soil and undercut rootball. 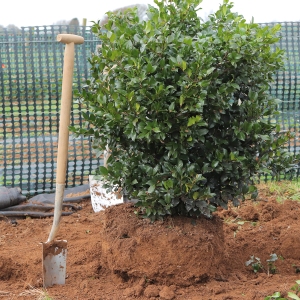 Get plant out of the ground and carefully reduce size of rootball. 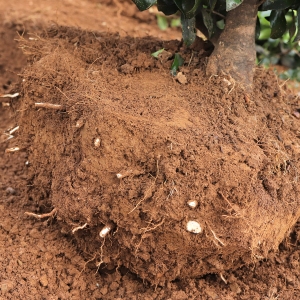 Once soil is removed, trim roots flush to the rootball. 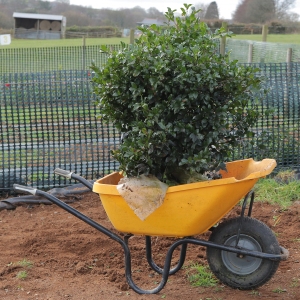 
I lifted the plant into my wheelbarrow and pushed it back the mile or so to my garden in the village. Got a few odd looks. Avoided curbs and potholes.

Dug a hole, popped the plant into it. Too deep, took it out, put a bit of soil back, put the plant back in, filled around the sides, working the soil down with the spade, gave it a good watering. Job’s a good’n. It will take at least two seasons for the root system to be extensive enough to withstand drought as well as it did before being moved, so I’ll be prepared to give it an occasional drench if it is needed. Being a sasanqua variety I didn’t even consider feeding it. Had it been a japonica or x williamsii I still probably wouldn’t feed it until its second season.

I have lifted several hundred Camellias in this way, some 6 feet or more tall; some to be potted, some replanted in the ground. Very large plants will usually suffer a check but all have grown away after a couple of seasons settling in.

I am in Cornwall, UK. In areas with colder winters it would be better to move them at the end of the winter but they would then have less time to put down roots before conditions became dryer, so watering would be more likely to be needed.